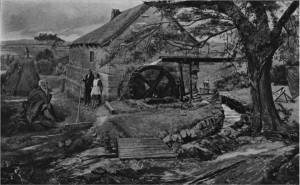 ‘How often have I paused on every charm,

The sheltered cot, the cultivated farm,

The never-failing brook, the busy mill’ – The Deserted Village

According to the critic Labouchère in the magazine Truth, whose review Crowe read on 24 May 1906, he had ‘succeeded in making Goldsmith ridiculous, as [he] had previously done as regards Shelley’.

This painting was one of those remaining in Eyre Crowe’s possession at his death, and was sold for £5 15s 6d at an auction of his remaining works at Christie’s in London on 18 March 1911.