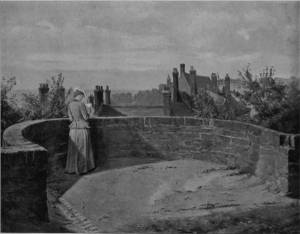 Original caption: ‘There are few prospects more charming than the familiar view from these old French walls’ – Thackeray

Crowe initially sketched and painted this picture in situ in Boulogne in the summer of 1898, and asked his niece Victoria Wilkinson to stand for the principal female figure back in London at the beginning of 1899. This painting was one of those remaining in Eyre Crowe’s possession at his death, and was sold for £1 11 6 at an auction of his remaining works at Christie’s in London on 18 March 1911.

… his On the Boulogne Ramparts (97) indicates a considerable recovery of the powers which have given us many a sincere and soundly painted piece of genre.