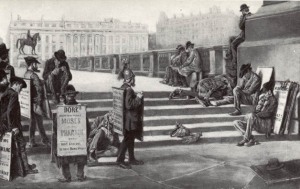 The painting was exhibited in Manchester in 1987 as part of a retrospective on Victorian social realist art, and was reproduced in the accompanying catalogue by Julian Treuherz, Hard Times: Social Realism in Victorian Art. Treuherz considers that the painting shows ‘a story of poverty and failure’, writing that the sandwich-board men were ‘the lowest of the low among casual labourers’, and remarking that one of the men is sleeping on the pavement, and several others ‘have the air of down-and-outs’.

‘Sandwiches’ is also reproduced in Christopher Wood’s Victorian Panorama: Paintings of Victorian Life (1976), where it is described by the author as ‘one of the most realistic and unsentimental of street-scenes’.

Mr. Eyre Crowe will probably contribute to the Royal Academy Exhibition … ‘There are Sandwiches and Sandwiches’, a view of Trafalgar Square, with a party of ‘Sandwich-men’ discussing their luncheons on the steps and the terrace. This is a small picture, with numerous figures, very happily composed and rich in expression.

Very remarkable in its individualisation of curious types is a small canvas by Eyre Crowe, displaying an assemblage of those nondescripts commonly known as ‘sandwich men’, in some public place that looks not unlike Trafalgar Square. How so many of the characters in question could have been got together, and got to dispose themselves in such a picturesque variety of attitudes, it is for the artist to explain. Enough for us that there they are, and that every figure of the strange miscellany has an intense reality that fairly fascinates the eye.

… ‘boardmen’ grouped on the steps in Trafalgar Square, and taking their luncheons after the fashion of their tribe. A good deal of character, some humour, and the painter’s unfailing care in working may be found in this solid and well-studied picture.