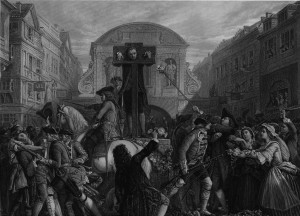 Original caption: ‘July 31, 1703, Daniel Foe, alias De Foe, this day stood in the pillory at Temple Bar in pursuance of his sentence, given against him at the last sessions at the Old Bailey for writing and publishing a seditious libel, entitled The Shortest way with the Dissenters. During his exhibition he was protected by the same friends from the missiles of his enemies: and the mob, instead of pelting him, resorted to the unmannerly act of drinking his health, etc.’

One of Crowe’s most popular paintings, De Foe in the Pillory won the medal for Historical Painting from the Society for the Encouragement of the Fine Arts in 1863. It had been sold to the art dealer William Agnew for the large sum of £400 on 2 May 1862, just after the opening of the Royal Academy Exhibition, and was sold on again at Christie’s in 1865 to Julius Sichel. James L Newell was the painting’s owner in 1887 and 1900. In May 1907, the painting was donated to the Salford Museum and Art Gallery by the Mayor of Salford, Alderman Isadore Frankenburg, J.P., in memory of his son Ralph, who had been killed in the wreck of the SS Berlin at the Hook of Holland in February of the same year. The painting is still owned by the Gallery and is hung on the wall of their Victorian room.

A painting with the same title and dimensions (Defoe in the Pillory, 1862, oil on wood, 12.5 x 16 inches (31.8 x 40.6 cm) – possibly a duplicate) was the gift of Henry C. Hutchins and is part of the collection of the Yale University Library, Connecticut, U.S.A. Reference: “A checklist of American paintings at Yale University,” New Haven: Yale University Art Gallery, 1982, no. 363.

One of the best figure pictures in the gallery is Mr. Eyre Crowe’s De Foe in the Pillory (457) … A picture full of character, awkward in drawing of parts, yet generally excellent.

‘De Foe in the Pillory’ (457) is another biographical picture added to the gallery of such pictures which Mr. E. Crowe has painted. It is his best picture for management of the many figures, and for colour and manipulation, if not for expression … Mr. Crowe has shown in this picture unexpected power in the management of a crowded composition, though we might which for a little more animation in the faces and action. His colour is simple and agreeable.

Mr. Crowe has made a great advance in his ‘De Foe in the Pillory’ (457). The colouring of this picture is agreeable and almost entirely free from the black and threaded appearance of former works.

The success of any pictorial narrative depends upon the truth, point, and persistency with which the theme is dwelt upon. This success, in a great degree, characterises the work; there are no mere expletive figures in the composition: each person is interested either sympathetically on the side of Defoe or on that of the authorities, which are principally military, acting in restraining the crowd in the good offices they proffer to the condemned. The painting and drawing are unexceptionable; the former is creditably earnest, without any affectation of eccentric manner.

[The painting was hung ‘on the line’ in the Royal Academy exhibition], a tolerably sure proof of the opinion formed of it by the hangers, and undoubtedly it deserved the honour awarded. The story is told with great point and truth; the characters are living, and have a purpose in the event that causes the assembling, and the manipulation is throughout most careful, solid, and artistically honest.