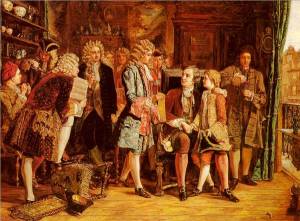 Original caption: ‘I had the honour of bringing Mr. Pope up to London, from our retreat in the forest of Windsor, to dress à la mode, and introduce at Will’s Coffee Room’ (Sir C. Wogan’s letter to Swift)

His other picture is interesting as a portrait picture, but has little story or expression, and shows small imagination, but much industry. It is called Pope’s Introduction to Dryden (1104). Sir C. Wogan is introducing the clever Windsor boy and showing his verses to the old poet in his snug nook at the window, while Steele, Tonson, Addison, Congreve, Vanbrugh and others club round in appropriate action.