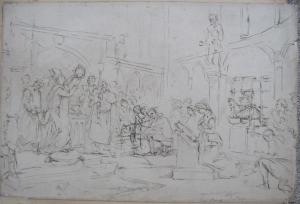 This sketch, signed ‘Eyre Crowe’, but undated, was auctioned on ebay in August 2008.

Louis IX of France had brought the relic of Christ’s Crown of Thorns to the royal chapel of Sainte Chapelle in 1248. In the 14th century Louis XI had a concealed oratory built at the chapel, from which he could attend mass unobserved. The sketch shows him watching the proceedings to the grille on the right of the drawing.

The purchaser of the sketch has drawn my attention to a number of incidents suggesting that the sketch might have been drawn in the 1850s. Eyre Crowe was living in Paris between 1853 and early 1856, and is known to have painted another scene depicting Louis XI in 1855 (‘The meeting of Louis XI and Edward IV on the Bridge of Pecquigny’). The subject of Louis XI was well known in 1855 thanks to Charles Kean’s portrayal of the king in Dion Boucicault’s ‘Louis XI’ at the Princess Theatre. Kean was sketched in this role by the Pre-Raphaelite painter Dante Gabriel Rossetti, an acquaintance of Crowe’s from his time in the Royal Academy Schools. According to the purchaser of the sketch, the choice of subject and staging has affinities with some of the works of other first generation Pre-Raphaelites, most notably James Collinson’s ‘The Renunciation of Queen Elizabeth of Hungary’ (c.1848-50), and John Everett Millais’ ‘The Disentombment of Queen Matilda’ (1849).