Boswell’s Introduction to the Literary Club (1856) 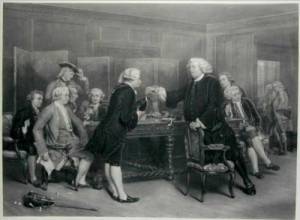 Engraving of 'Boswell's Introduction to the Literary Club' by Eyre Crowe (1858), by W.H. Simmons, published by Moore of London, c.1862

According to Crowe’s later diary entries, this painting was sold to the art dealer Gambart in 1856, preventing it from being exhibited at the Royal Academy. It was in the collection of Mr Hurst of Rochdale, then auctioned at Christie’s in June 1899 and bought by an art dealer named Nathan Mitchell for 42 guineas (£44 2s 0d). It was auctioned again in London on 21 March 1910, fetching £29 8s 10d.

Mr. Eyre Crowe – among his many pictures illustrative of literary history – has produced nothing of such equal technical merit as his group representing the introduction of Boswell to the Literary Club at the Turk’s Head. The figure of Boswell, delightedly receiving the accolade of the great Samuel, is particularly happy, both in likeness and action. Dr. Johnson is also very faithful to the received idea of the great social and literary dictator. Besides these, the picture embraces portraits of Goldsmith, Burke, Garrick, Sir William Jones, and Reynolds, the latter recognizable only by his ear-trumpet, for the face is untrue to any portrait we have seen of Reynolds at any period of his life. The groups are well composed, and the picture altogether carefully and unaffectedly conscientious.

3 Responses to Boswell’s Introduction to the Literary Club (1856)