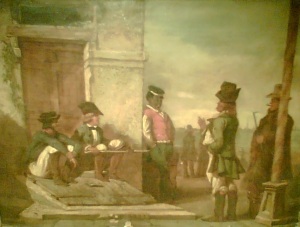 This painting is untitled but the presence of a black boy suggests that it was inspired by Crowe’s travels in America. The title ‘American Scene’ was devised by Kathryn Summerwill in 2008 to describe the subject matter. The painting is signed ‘Eyre Crowe 1855’ on the reverse, and the framing was prepared by Charles Roberson of 54 Long Acre, London.

The painting was formerly in the possession of the von Marle family of Wesel, Germany. It was acquired by the grandmother of the present owner in the mid-20th century.

One Response to American Scene (1855)