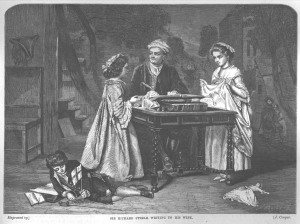 Engraving of ‘Sir Richard Steele writing to his wife’, by Eyre Crowe (1860). Engraving by J. Cooper, published in the Art Journal, June 1864

Steele and His Children by Eyre Crowe

The subject of Mr. Crowe’s picture is completely described in the following letter from Captain Sir Richard Steele, “honest Dick Steele”, as Thackeray calls him, to his second wife, dated Hampton Court, March 16, 1717: – ‘My dear Prue, – *** The brats, my girls, stand on each side of the table, and Molly says that what I am now writing is about her new coat. Bess is with me till she has new clothes. Miss Moll has taken upon her to hold the sand-box, and is so incompetent in her office that I cannot write more. Your son, at the present writing, is mighty well employed in tumbling on the floor of the room, sweeping the sand with a feather. He is also a very great scholar: he can read his primer; and I have brought down my Virgil. He makes very shrewd remarks about the pictures. He begins to be very ragged, and I hope I shall be pardoned if I equip him with new clothes and frocks, or what Mrs. Evans and I shall think for his service.’ The work itself is at present at the Winter Exhibition of pictures and sketches now open in the French Gallery, Pall Mall – an exhibition of much interest.

This painting was exhibited at the Winter Exhibition at the Society of British Artists’ Suffolk Street Gallery in Pall Mall, and bought by a collector, Mr Plint of Leeds. It was later owned by Mr James Leathart of Newcastle-upon-Tyne, a celebrated collector of contemporary art, to whom Crowe had been introduced by William Bell Scott in June 1862. Mr Leathart’s widow was forced to sell the collection after his death in 1895, and the picture was purchased by Mr Ralph Atkinson.